Note: All images used without permission. Original sources are cited at bottom of page.

See the diagrams below illustrating the proper e-tool arrangement.

As any student of history knows, regs are regs and often soldiers don't follow them. While soldiers would have certainly followed the regulations on knapsack arrangement for formal occasions such as formations and parades, in the field they would have arranged their packs according to individual preference or convenience. The blanket, often rolled inside the tent canvas, was arranged in various fashions. It could either be made into a short roll and placed on the top of the pack or, in the style of the Colonial and Zouave troops, be folded like an accordion and placed on the top. The tent canvas itself would either be folded to the same width of the short blanket roll and then wrapped around the blanket, or it could be kept at it's full length with the blanket rolled inside. With this method, the roll is placed on top of the pack with the empty ends of the tent canvas being strapped down on the sides of the pack.

If the tent canvas wasn't rolled around the blanket it was folded and placed under or on top of the blanket. Tent poles and stakes were often placed on the top or sides of the pack. And E-tools such as the wire-cutters or billhook were often placed on either side or the top, though the spade-shovel was typically always left on the side. In part due to their shape, camping implements could only be arranged as per the regs. The individual mess-kit was nearly always seen on the top of the pack. As noted above, any other item that couldn't otherwise fit in the pack was attached as conveniently as possible you straps or twine.

For reference, see the pictures below as well as the Original Photos and Artwork in the Images section.

Putting On the Knapsack

While at first it may seem trivial to provide a description of how to actually put on the knapsack, anyone who has had first-hand experience will know this is no easy task. With the command "Sac au dos" the men did their best to put the awkward packs on their back. The typical method was to leave one shoulder strap fixed and the other one undone. Usually the right strap was left undone. The soldier lifted the pack and slid his left arm through the left shoulder strap, then grasped the end of the right shoulder strap and pulled upward to drag the right side of the pack up to his shoulder. Holding the strap tightly to maintain the pack at the shoulder, the soldier then leaned forward and pulled the shoulder strap down and behind him, bringing the end of the strap to the right buckle. Finally, he ran the strap through the buckle and fixed it at the desired length. With a particularly heavy load, the man often turned to his neighbor for assistance in lifting the pack and buckling the right shoulder strap. If a comrade wasn't in sight, the soldier could also lean against a tree to suspend the pack. 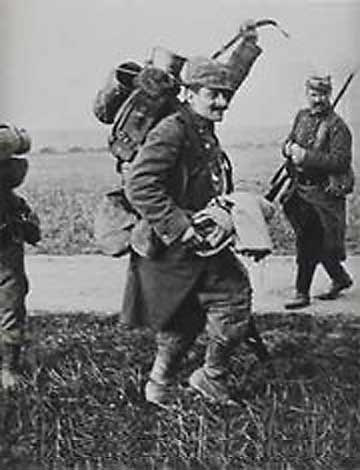 Note that some items shown in diagrams were no longer in use during the war, e.g. grand bidon